This is a submission to Game Off 2018

View the submission page for this entry 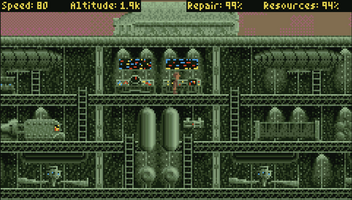 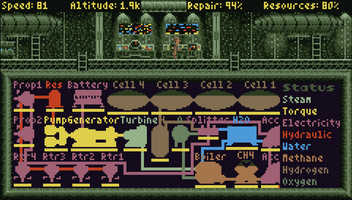 Work has continued after the initial Game Off 2018 submission. This includes some new features, updated visuals, new sounds, some music, and bug fixes.

The new features focused on game play enhancements and addressing some early feedback.

Now there is a screen that displays the current status of the various components. Including:

With this change some items from the navigation screen have been moved to the status screen. In particular the fill states of certain tanks.

The Gremlin will appear at random intervals to break components on the ship. Keeping an eye out for Gremlins is now a key part of traveling the most distance.

A short music track has been added to the title screen to set the mood.

There is now a background that helps convey a sense of place. It can be used to see if the ship is climbing or descending, and get an idea of how fast the ship is currently traveling.

Tapping up or down on the resource map now loads a larger view. This does take a second to appear, but helps find areas with methane or water vapor.

As components get damaged, they can now appear damaged. This is shown by particle effects and changes to a damaged version of the component. The lights can now also go out if there isn't enough power.

There are frequent sound pops related to: https://github.com/nesbox/TIC-80/issues/714. Awaiting fix and will re-upload when available.